Who hasn't fantasized about leaving the corporate world to pursue a dream of their own? We all think about it but not many people actually follow through with it. I can't blame them, it takes a lot of courage to leave the comforts of salary, benefits, RRSP matching and daily structure for something completely unknown. Actually, it's absolutely terrifying and that fear is what holds most people back.

After working at various corporations, my latest stint was at a tech start up, where I worked for 5 years. I must admit, I had it pretty damn good. I loved the people I worked with, the work perks were unheard of, with "unlimited" vacation time, quarterly bonus', a cushy salary and a manager that always supported me. It couldn't have gotten any better as far as corporate was concerned. So, why would I want to leave what some would call a "dream job"? The answer is simple, really. I wanted to put 100% of my energy into pursuing a dream of my own. I've been doing my "side hustle(s)" for years and have never been able to go ALL IN on something of my own because I was stretched too thin. The truth is that at the end of the day, I wanted to pursue my passion. On top of that, I realized I had no legacy of my own. My whole professional life was about helping someone else fulfill their dreams, while pushing mine to the side. Like so many others (maybe even you) I fantasized constantly about what my empire could look like if I was given the opportunity to take my passions and ideas to the next level. Then - It hit me. I don't need to be given the opportunity, I just need to believe in myself. Opportunities aren't just handed to anyone, you have to create and chase them. I was also incredibly blessed that my man believed in me even more than I believed in myself. Luckily for me, his dreams weren't that far off from mine. This is when we decided to take our aspirations to the next level and start planning what I hope one day will be our legacy and empire.

Here is a little background on how we came to the realization that we wanted to open a pizza shop. I have a certification in culinary arts and always kind of knew I wanted to do something food related. Ted had come from a family of restaurateurs, for years he had been deciding if following the family legacy was the right choice for him. While still working our corporate jobs, we took advantage of our "unlimited vacation policy" and took time off to tour places we considered FOOD INSPO. We visited Greece for two weeks then France and Italy for an additional month. Working our way through these 3 amazing countries was a culinary dream come true. In Italy, we took pasta and pizza making classes in every region we visited, which was incredibly magical. Our favourite was the Chianti region, where we spent time at a local farm that produced true farm to table food, it was a superb experience! We learned so much from the locals and truly enjoyed every moment of it.

That was the easy part. Coming up with a business plan, this is when things got tougher. Location, specifics, finances, etc. It all needed to be considered. After putting together an incredibly detailed business plan we felt a world of relief. The feeling of relief was followed immediately by fear. Shit was getting real! For 8 months we dealt with contractors who didn't stick to a timeline, electrical issues, plumbing changes and a heap load of other expenses and unexpected issues. One thing you need to know about starting a new business, nothing sticks to a timeline or budget and it will be incredibly overwhelming. During this time, I wasn't sure if this was for me. I didn't know if I was strong enough. Could I do this? I wasn't sure and doubted myself a lot. BUT, we didn't give up. Luckily, we had the experience of Ted's parents helping us and reassuring us that if you persist, the pay off would be worth it. Perseverance, that is what separates successful people from unsuccessful people. Giving up is easy but sticking with something even when it's difficult, that is hard. Having supportive family and friends is so incredibly important. Ted and I are both blessed to have such amazing people surrounding us.

After almost a year of juggling a full time job, blogging and getting everything to where it needed to be at the pizza place, I was finally at a place where I could quit my corporate job. I thought I would be excited to leave but it was bittersweet. These people had become my family over the last 5 years. BUT, that's life, isn't it? You have to make moves and get out of your comfort zone if you want to move forward and grow.

I heard a quote recently that really stuck with me. "Job security is a misnomer, when your security is in someone else's hands." The truth is, none of us really have job security if you think about it. By no means am I saying everyone should immediately quit their job and pursue their dream. Keep your side hustle until YOU become the bottleneck to your success, THEN do what you need to do in order to keep going. If I had quit my job when the pizza shop was merely an idea, I would have been without income for a year, putting us in a tough spot. I quit when I was at a place where I needed to be physically present in order to move forward. At that point I had also saved enough money to sustain myself in case the worst case scenario happened.

Now, the hardest part of all begins. We are set to open within the next month and I'm still so terrified but I'm also incredibly optimistic and excited. This is the beginning to the most incredible journey I've ever taken. I know there will be highs and low's, nothing will be perfect but as long as we presist, I know we will succeed. 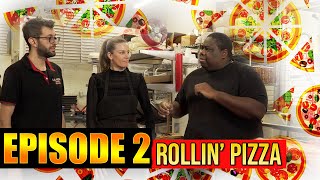